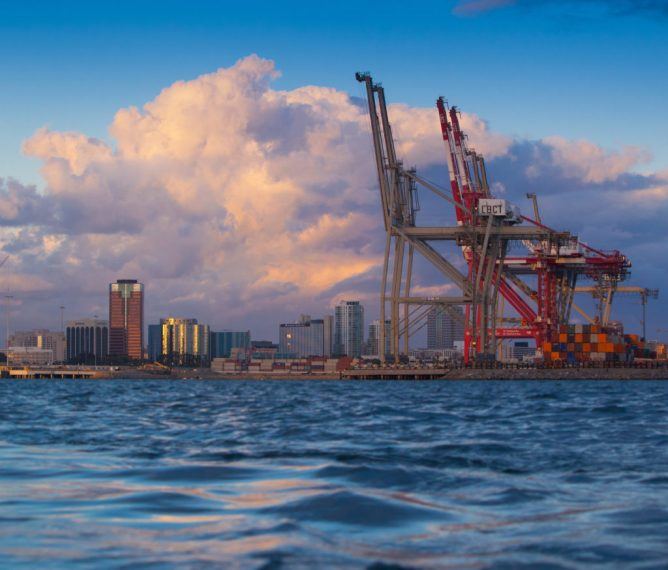 The City of Long Beach is home to hundreds of personal pleasure crafts of all shapes and sizes, and is a popular destination for visitors to bring their boats for a day or two of fun in the sun. But it’s also home to another kind of ocean craft: Container ships coming to call at the busy Port of Long Beach. And they’re getting bigger every day. This might sound like a recipe for more smog than sun. But this particular port has been making waves in more ways than one, and it’s a breath of fresh air for Long Beach’s residents, as well as its boaters.

It’s hard to miss the Port of Long Beach’s impact on the city’s western skyline. Enormous cranes reach tall into the sky, lifting hundreds of thousands of containers from enormous ships to the docks where they are either loaded onto waiting trucks or onto a complex string of cargo trains. Ports like this one are infamous for the pollution they cause, and until recently the Port of Long Beach was no exception. 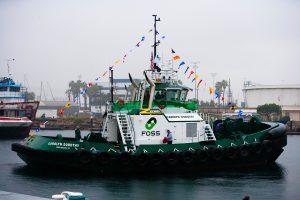 2005 marked the beginning of a new era for this busy seaport. Then Executive Director Richard Steinke signed the Green Flag Initiative, setting never before seen standards in the reduction of air pollution caused by port commerce. Ships coming to call in Long Beach were given new guidelines, and the thousands of truck drivers coming in and out were also called upon to do their part in reducing the air pollution.

Groundbreaking new programs were put in place. Among them was the port’s Green Flag Vessel Speed Reduction Program, a vessel speed reduction zone restricting the speed of container ships as they approached shore. Reducing speed means burning less fuel, which equals fewer emissions. New regulations were also put in place to ensure only low-sulfur fuel is burned, and an increased use of shore power for cargo ships so instead of continuing to rely on fuel after docking, they run on electricity for the duration of their visit. 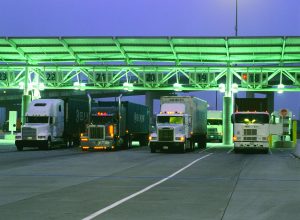 Another flagship program put in place is the Clean Trucks Program which set standards for the type of fuel and emissions acceptable for the trucks coming into the port for pick-ups and deliveries. Trucks deemed too “dirty” were banned, and a center was put in place on port land to assist truckers and trucking companies with acquiring new fleets of clean burning rigs.

So what does all of this mean today, eleven years after the introduction of the Green Flag Initiative? Well, according to the 2015 annual inventory of port-related air emissions, which is conducted by an independent consultant and reviewed by the U.S. Environmental Protection Agency, since 2005 there has been a 48% reduction in nitrogen oxides, 85% reduction in diesel particulate matter, and a 97% reduction in sulfur oxides.

And they aren’t stopping there.

Today the Port of Long Beach remains focused on continued reductions of air pollution through an increased use of on-dock rail systems, new joint efforts with the neighboring Port of Los Angeles, and an ongoing interest in next level technological advancements. According to a recent statement from Long Beach Harbor Commission President Lori Ann Guzmán, “While we’ve had challenges, we continue to be committed to reaching our goal of zero-emissions operations. We are steadfast in our commitment to improving air quality for the region now and over the long term as evidenced by our recently approved $46 million mitigation grant program.”

Now more than ever Long Beach’s many residents, boaters, and visitors can breathe a hard earned sigh of relief.

The location could not be found.